Imagine a woman with Alzheimer’s disease who’s so cognitively impaired that she can no longer feed herself. She stares into space, her eyes blank. When her daughter visits, she doesn’t recognize her. Now imagine that a nurse brings in a CD player and plays an operatic aria the patient enjoyed when she was young. When the woman hears the music, her eyes light up; she hums the tune and waves her arms in time to the music. Her daughter is amazed and thrilled, and for a few precious minutes, her mother seems to know her.

Down the hall, another patient with Alzheimer’s disease has begun the rocking motion that signals the beginning of agitation. At this point, the nurse usually gives her a psychotropic medication, but today she brings in a CD player. When the patient hears the strains of her favorite piece of music — a Rachmaninoff piano concerto — a smile spreads across her face. She stops her agitated movement, and for now at least, no psychotropic medication is needed.

This is the power of preferred music. Besides music, touch and exercise, animal presence can also calm cognitively impaired patients, reduce their need for chemical and physical restraints, heighten their awareness, and put the “sparkle” back in their eyes.

About 5.4 million Americans have Alzheimer’s disease, a type of cognitive impairment, and one in eight people age 65 and older (13%) is affected by it.1 By 2050, up to 16 million people age 65 and older will have the disease unless an effective preventive therapy or cure is found. Half of all patients residing in nursing homes suffer from some type of cognitive impairment.1

Any healthcare professional who has ever worked with patients who are cognitively impaired is familiar with the blank stare in the eyes that signifies a loss of spontaneity, sense of humor, personality and the sparkle so vital to living. Along with this loss of affect, these patients experience a loss of memory and language ability, as well as a progressive decline in their stress threshold as they become more confused. Stressors can include fatigue; changes in routine, caregiver or room; as well as illness, pain and adverse effects of medications.2 Noise is also a stressor that can lead to the persistent elevation of stress hormones.3 When the stress threshold is exceeded, the patient can become agitated,2repeat words and become restless and aggressive as the stress builds. This disruptive behavior can be a problem for caregivers during routine care, as well as cause strain for other patients and staff.2

In the past, staff at nursing facilities used physical and chemical restraints to control agitated and aggressive behavior. However, the 1987 Omnibus Budget Reconciliation Act mandated the exploration of less restrictive alternatives. And as the population ages, nurses and other healthcare professionals working in nursing homes, other long-term care facilities and home care settings will find it increasingly important to discover innovative, chemical-free ways to calm their agitated, cognitively impaired patients. Preferred music, touch, exercise and the presence of animals are easy, noninvasive and effective alternatives.

Congress recognized the importance of music as therapy when it was added to a list of supportive and preventive health services in the Older Americans Act Amendments of 1992. The act defines music therapy as “the use of musical or rhythmic interventions, specifically selected by a music therapist to accomplish the restoration, maintenance, or improvement of social or emotional functioning, mental processing, or physical health of an older individual.”4 Music therapists are credentialed professionals who work in a variety of healthcare settings.5

There are physiological reasons why music is effective. Avram Goldstein, MD, professor emeritus in the molecular biology department at Stanford University, showed that brain chemicals are involved in people’s enjoyment of music. The thrill sensation — the exhilaration people get when listening to their favorite music — is a result of endorphins released by the pituitary gland and related to the autonomic and limbic systems, subcortical areas heavily involved in people’s emotional reactions.What makes certain music elicit thrills is associated with an event in the person’s past.6

People who listen to relaxing music also show a decline in stress hormones, such as adrenocorticotropic, prolactic and human growth hormones. Listening to music has been shown to activate a cascade of brain regions that culminates in the transmission of opioids and the production of dopamine associated with positive mood.6 Music appears to mimic some of the features of language, and conveys some of the same emotions. But more than language, music taps into primitive brain structures involved with motivation, reward and emotion.7

Listening to music also activates a network of brain regions related to attention, memory and motor functioning. A study of 54 patients with middle cerebral artery stroke showed that those who listened daily for two months to self-selected music had significantly improved verbal memory and focused attention. They also experienced less depression and confusion.8 (Level A)

Music is especially effective in patients with AD because it can decrease agitation and increase focus and concentration.Elderly persons with dementia who listened to music three times a week for eight weeks had significantly improved next-morning cognitive functioning; however the effect was not sustained after the intervention was stopped.9 (Level A) Music provided interactively to elderly people with severe dementia was even more effective at improving the person’s stress levels than music provided passively, according to another study.10 (Level A)

Music can also decrease eating issues and weight-loss problems that so often plague patients with dementia. A study of the effect of a music program during lunchtime on problem behavior showed that playing background music while residents ate their lunch also significantly reduced physical and verbal aggressive behavior among older residents with dementia.11 (Level B) Another small study found that music increased caloric intake by 20% when it was played during mealtimes, as the resident spent a longer amount of time at the dining table.12

Nursing facility staff can use a music player to introduce soft, soothing music into the dining room at mealtime. Ralph Montellosuggests that J.S. Bach’s Largo, Concerto for Two Violins in D Minor and Ralph Vaughan Williams’ Symphony No. 3, Pastoral can create feelings of peace; Brahms’ Symphony No. 2, first movement, and Beethoven’s Symphony No. 2, second movement, can evoke feelings of nurturing.13 Music that can help patients focus includes Beethoven’s Violin Concerto in D, flute quartets by Hayden, and Mozart’s Sonata for Two Pianos in D Major.13

To make music at mealtimes in the nursing facility part of the patients’ daily experience, it’s important to gain the cooperation of the nurses aides and other multidisciplinary staff. Nurses and other healthcare professional team members can start by explaining how certain kinds of music can diminish patients’s agitation at mealtime and then asking them to participate. Home care nurses can follow the same process with family caregivers by explaining the value of soothing music at mealtime and suggesting appropriate musical selections.

Preferred music — music based on the patient’s individual preference — has an especially calming effect on agitation. One study showed that individualized music significantly reduced the frequency of agitated behaviors in cognitively impaired elders during and after playing of the music compared with classical “relaxation” music.2 And when individualized music was administered daily and as needed to eight elderly people with dementia, a significant reduction in agitation was found on the day and evening shifts. Music also promoted meaningful interaction between the residents and staff.2 Playing preferred recorded music during caregiving routines, such as bathing, has also been shown to decrease the frequency and volatility of patients’ aggressive behaviors.2

If your facility does not have access to a music therapist, but it does have activity therapists on staff, ask them to help institute a program of individualized, patient-preferred music listening.

To implement a program of preferred music, first discover the type of music that was important to the patient when he or she was young. Begin by interviewing the patient; if this isn’t possible, ask family members. Relatives are grateful when the nursing staff asks them to identify the patient’s favorite music. Ask them to be as specific as possible. The list can include classical, blues, gospel, show tunes or any music that was meaningful to the patient in the past. You can also develop a patient-preference sheet where they can list the patient’s favorite music as well as favorite scent, flower and pet.

Next, obtain the patient’s preferred music in the format compatible with the available music player (MP3, CD, etc.). You can ask family members to bring in music they think is especially meaningful to the patient. Allow the patient a minimum of 30 minutes to listen to music in the location where he or she spends the most time.2 Try to be sensitive to other patients who might be in the area and who might not like that type of music. Observe the patient listening to the music so you can evaluate its effects on agitation.

As with music at meals, this intervention’s success depends on involvement by the nurses aides and the multidisciplinary staff. You can stress the importance of using the patient’s special music on a daily basis and show them how to do it. Then you can document instructions in the patient’s daily plan of care. Family members may also enjoy participating in this special music time and can be encouraged to join in. The periods of heightened awareness, memory and even reminiscence that can come from listening to patient-preferred music can be meaningful to families and thrilling to staff.

Nurses and other healthcare professionals have long used touch and massage to make patients comfortable. But certain kinds of touch, especially if the patient is approached in a gentle, unhurried manner, can alleviate agitation. Team members can sometimes calm patients with dementia just by holding their hands and talking to them. This can be especially effective at mealtime when they need help eating. Gentle touch in addition to verbal encouragement helped residents in one study increase their nutritional intake and avoid weight loss.14 (Level A)

Massage has many benefits, including general relaxation and increased circulation, as well as creating a positive mood, reducing heart rate, lowering blood pressure and providing pain relief. Studies show that massage can also help alleviate depression and pain by lessening cortisol and increasing serotonin and dopamine.15Cortisol is a steroid hormone produced by the adrenal gland in response to stress. Serotonin and dopamine are neurotransmitters that contribute to feelings of well-being and enjoyment.15

When certified nursing assistants were taught to provide gentle massage in a one-year project to assess the effects of gentle massage on elderly nursing home residents, pain scores and anxiety scores declined. Eighty-four percent of the nursing attendants reported that the residents enjoyed receiving tender touch, and 71% thought this type of massage improved their ability to communicate with the residents.17

Touch and massage, whether back, foot or hand massage with scented oils, offer easy, nonchemical ways to relieve patients’ anxiety and agitation. You can teach nurses aides, multidisciplinary staff and family members how to use the type of touch that’s effective with each patient, and then incorporate the intervention into the daily plan of care. Begin by demonstrating the touch/massage on the patient to the caregiver, and then watch a return demonstration from him or her to make sure he or she does it correctly. 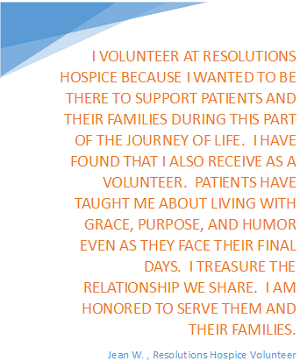 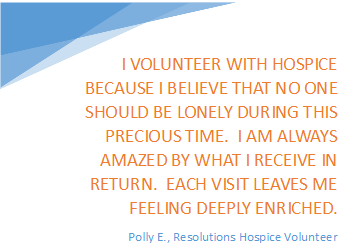